Welcome to our No-Nonsense Newsletter, where we bring the latest no-nonsense industry trends, expert viewpoints, and best practices to #GetShipDone.

Typhoon season in the Western Pacific and recent threats of industrial action by freight railroad workers in the U.S. and dock workers at the U.K.’s busiest container port have threatened fresh supply chain disruptions.

Even with a tentative agreement in place ending the U.S. rail strike, the mere threat of one has already proven to be disruptive. Since roughly 30 to 40% of all goods in the U.S. are moved by rail, shippers were forced to begin the implementation of emergency contingency plans. On top of that, there are still congestion problems at some U.S. ports along with trucking and warehouse capacity issues as demand and supply remain unbalanced.

After a similar work stoppage last month in the U.K., members of the one dockers union at Felixstowe are already planning a walk out beginning at 7am on Tuesday, September 27. U.K. retailers in particular are concerned as September is when they start unloading goods for Christmas.

Finally, Typhoon Muifa disrupted the twin port cities of Ningbo and Zhoushan just last week. These two cities share the ranking of second-busiest port in China in terms of cargo handled. The typhoon forced 7,400 commercial vessels to seek shelter and grounded flights for at least one day.

Future resilience against such supply chain disruptions is only possible with the efficient use of digital tools, providing shippers and logistics solution providers visibility and control during peacetime and wartime.

Rather than pay, rail workers have been most frustrated by the lack of flexible schedules. A rejected contract would give rail conductors and engineers the chance to legally strike again after another “cooling off” period. Charles Stallworth (a train conductor who wrote this Newsweek piece, Why Railroad Workers Like Me Are Planning to Strike This Friday was quoted as saying: “At this point, I’m kind of backed into a wall where I have to go with it, even though I don’t really agree with it.”

In the event of a US railroad strike, farmers would be impacted first. This would be followed by chlorine shortages to keep tap water clean. Later, car shipments would be hit. A strike lasting a day or two will not have much impact. One that lasts a week or longer would cause serious disruptions.

Amid strike threats, freight railroads say they will limit hazardous materials and sensitive cargoes (e.g. compressed and liquefied gasses; chemicals used for fertilizer and in the manufacturing and pharmaceutical industries; and chlorine). They also may stop accepting certain types of freight (e.g. bulk shipments) to avoid materials being unattended or unsecured in case of a work stoppage. Some rail customers are evaluating contingency plans, including shutting down processing plants or hiring alternative transportation providers (e.g. trucking companies).

Shipping a container from Shanghai to the West Coast cost $3,959 in the first week of September, down 23% from the previous week. Shipments from Shanghai to the port of Rotterdam in the Netherlands and elsewhere in Europe have also fallen 45% since the beginning of the year. A European shipper was quoted as saying: "Demand has been falling since around August. Even if you lower your rates and market them, there are no goods to carry."

Oeyvind Lindeman, chief commercial officer of Navigator Gas, has noted: “There’s a saying that everything that moves out of China in containers has to come into China as raw materials.” Two viewpoints have emerged:

Ocean freight companies are adding air cargo to their businesses as shippers look for a “one-stop shop” to move goods around the world. This means purchasing aircraft or doing deals with struggling airlines are an attractive option for ocean shippers.

No-Nonsense Chart of the Week 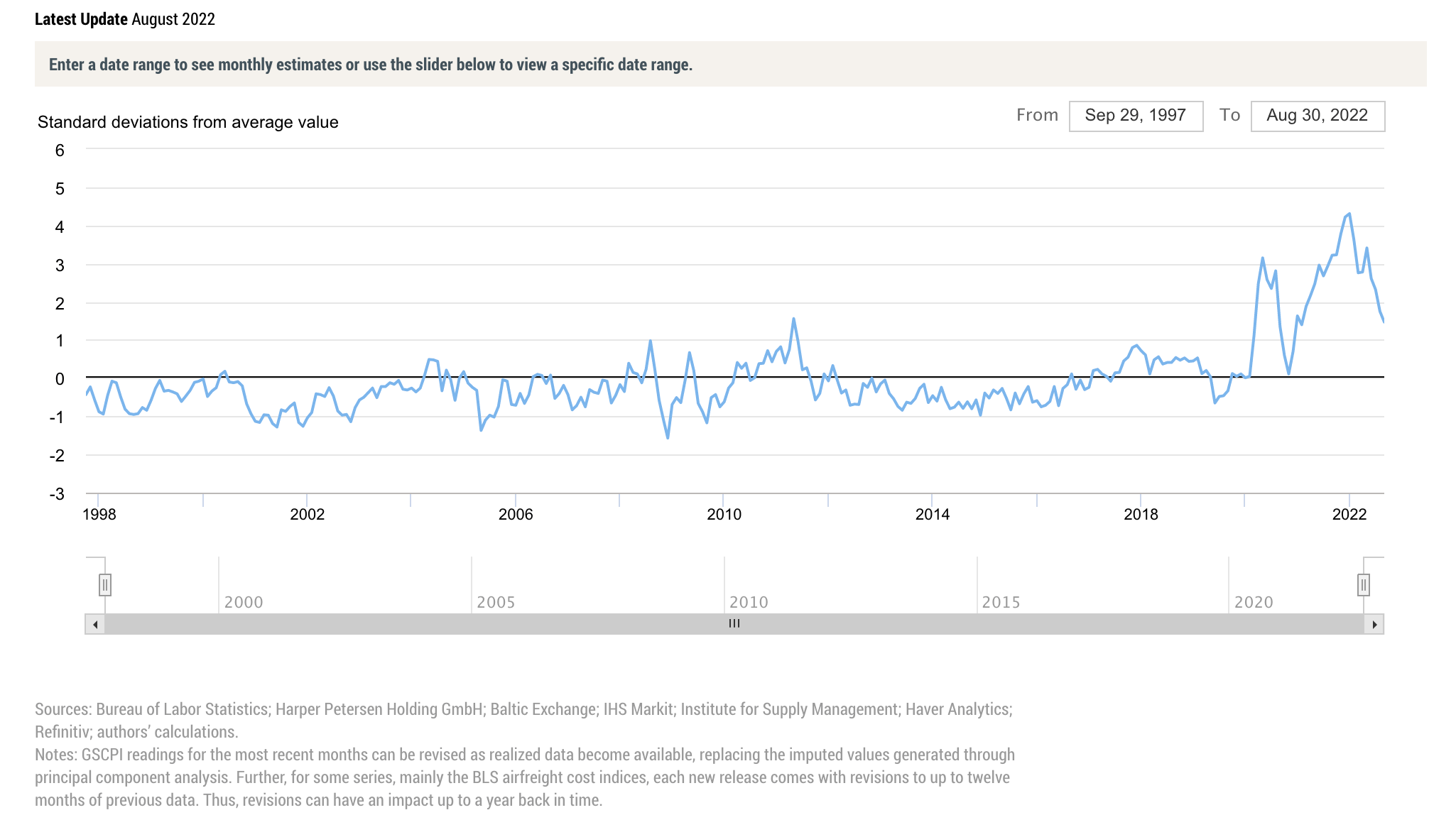 No-Nonsense Quote of the Week

Manufacturers who digitally transform the way they do business can expect a range of enhancements that will benefit their business. This includes:

Nine members of the Young Entrepreneur Council share their advice for how entrepreneurs can weather the current supply chain storm, and explain how these tips can help them build better processes for the future.

Five problems that could slow supplies of food, computers, cars and other goods this winter (The Conversation)

How to calculate the ROI for a TMS

We will share our approach on how to calculate the ROI for a TMS so you can glean the potential cost savings the right TMS can bring.

How does quoting in the Cargobase platform work?

A chat with Cargobase CEO Wiebe Helder about the Cargobase platform. Cargobase is the independent online platform for on-demand freight.